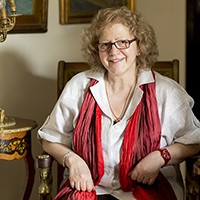 When The Gods don’t hear your call

The beautiful sound of silence


I recognized it! It is the prototype of the feminine figures that protect boundless and ageless love, that sheds a tear even if they know that somewhere there is (because it was registered once), eternal youth and life without death, who witnesses, helplessly, the death of the clown produced by paltry, but repeatable causes and the suppression of freedom in communism, who listen to the CNN news, which recount stories about fulfilment or anxieties, about good and evil on a planetary scale (and we have named thus the thematic series proposed by Oana Maria Cajal through the exhibition opened at the Senso Gallery), which watches for remembrance Octavian Mosescu, the primary grandfather and the beautiful Penca in order to bring them all together again in Balchik, the mythical place in which they were married, entwining them on the solar itinerary of the Romanian modern art.

The prototype – Oana’s good fairy godmother and her clairvoyant witness – is a famous visage, which became a symbol of modern sculpture, with an iconic name: Miss Pogany and an illustrious author, the Romanian Constantin Brancusi (a replica of the work that was initially in the family’s collection, entitles the author to assert: “I was born in my parents’ home in Bucharest, under the spell of Miss Pogany’s bronze eyes”).

The setting of these images in motion and in search – of places, meanings and truths, dreams and ideals –, in metamorphosis (gondolas become gastropods, the feminine body– bird and flower, homo sapiens – the three-headed hydra, the bird with the pineal eye, the sacred fish, the book – the pillow, the writing – confession, the world – a stage, the theatre – a world) and anamorphosis, is, usually, a paradisiacal, real, exterior space or from a cherished interior, with hortus conclusus gardens, with books and libraries, with splendid objects or furniture stylish, extracted with forms and memories from the houses in which the artist has lived in Bucharest (with her parents Balcica and Constantin Maciuca – art historian and theatre critic respectively and her brother Alexandru – curator, expert in Romanian modern art) or in Rimnicu Sarat (with her grandparents, the already mentioned collectors).

The image is, usually, simultaneous: the eye watches alertly, moved, saddened, alert or powerless, the silent clown vanishes behind the mask, is disarticulated and reconstituted, according to necessity, in the dusk, the forest loses her outlines, her love (to the fellow man, nature and fantastic animals, beauty, maternal and filial, to the ones that are intended for each other, among which Pierre Abélard and Héloïse d’Argenteuil have a special place) blossoms and lasts, the apple (fruit) suggests the everlasting temptation, although the tree form which the snake descended becomes the miraculous place in which angels can materialize, statues come down from their pedestals in the city’s tremor, legends and myths, reinvented, adapt, words thought or uttered become seconds, sounds, smells, objects which are hectically seeking their identity and integrity.

In these frames, regularly fantastic actions occur, in which lost time can be recovered, the future becomes accessible, and space abhors a vacuum; part of the participating characters (although physically gone) can be identified by photographs – Nietzsche, Ellen Stewart, Octavian and Penca Mosescu; other anonymous figures appear in significant situations; from the multitude of realist representations (photographic collages) or invented (mysterious, unsettling, hallucinatory, exclusively subjected, like in the drawings of children, to hierarchical perspectives), we retain forum sculptures (that one that represents Murasaki Shikibu, the author of the medieval Japanese novel, who lived at the end of the 1st millennium, for instance), effigies, more or less known personifications, which make a reference to the collective cultural memory, but also to each person’s associative capacity and imaginative function (the ones of the author are, undoubtedly, inexhaustible).

Theatre – her great love – is ceaselessly presented in Oana Maria Cajal’s works: through masks, through stalls whence alert or indifferent eyes are watching, through the backstage and specific conventions, through curtains that envelop as much as they can and reveal what they should, through a vision of art direction, through the tendency to grant to figurative presences, an archetypal value. Theatre is, according to the creator in question – who wrote a large number of plays, performed especially in New York and less so in Bucharest –, “a place where people dig, shoulder to shoulder, on the archaeological dig of their forgotten beliefs, of their collective dreams, of their fears and hopes. A place where they discover that, despite the tyrannical presence of death, life shines in her most scintillating colours”. Not only life shines, but also the colours utilised on the canvas and in posters (for the unwritten plays); pure and intense, these do not burn (according to a title in the exhibition), but they actively and imperatively participate in the visual show.

In Oana’s never before seen world, everything is allowed and accessible, evil only exists because it has not been excised from the world, and freedom, embodied from sea foam in appetising and baroque feminine forms (which update the myth and eliminate any memory of the classical style) was, finally, (re)acquired. – PhD Doina Pauleanu, art critic and director of the Art Museum of Constanta.


“I was born in my parents’ home in Bucharest, under the spell of Miss Pogany’s bronze eyes. I saw in her my good fairy. Constantin Brancusi’s famous sculpture was the soul, the sun of the art collection of my grandfather on my mother’s side, Octavian Mosescu, an admirer and emulator of artists, a refined collector who, under the guise of an ageless bohemian, was hiding the depth of a Socratic thinker. I have spent my childhood surrounded by works of art, by wonderful objects and paintings. For me, the walls of the house were windows opening up towards the light of colours, towards dreams, towards love. Each painting was telling me a story and my imagination was blooming near them and near the extraordinary artists and writers who frequently visited our house: Lucian Grigorescu, Camil Ressu, Jean Steriadi, Gheorghe Anghel, Dumitru Ghiaţa, Ion Pillat, Adrian Maniu, Camil Petrescu, Hrandt Avachian.

When I was 5, my brother was born. Waiting for him to arrive from the hospital, I did my first drawing. A brown vase, with brown flowers, on a brown table, under a brown sky. The brown pencil was the only one I could find in the house. I didn’t like brown, but I remember how happy I was that I could draw!

When I was 9, I had my first exhibition in the orchard in front of my grandparents’ summer house. I hung my paintings on a clothesline, between two cherry trees in bloom. My grandfather participated very ceremoniously in the <>. He stood for a long time in front of each painting and studied it carefully. In the end, he bought a few <>.

When I was 18, I was ready to enter the Beaux-Arts Institute. A day before the exam, I’m not sure why, I changed my mind and enrolled in the Theatre and Film Institute. I became a theatre critic, but I had no enthusiasm for my job. Just like the colour brown… In contrast, I adored theatre. Meeting the legendary Ellen Stewart in Bucharest was decisive. Shortly after, I managed to escape Ceausescu’s dictatorship. I took the plane to New York with a bandaged hand: the night before I left, my best friend, the dog of our neighbour from across the street, bit me. Why? This is how my eternal voyage started. From New York, I went to California, where I got a Master’s degree in Drama and where I began to write in English. After the revolution of 1989, I wanted to return. Instead, I got married to my first love from Romania, Dr. Stefan Cajal, who had lived in Montréal until then. When our daughter Annya was born, I learned to love in a way that I did not even know existed. She is the perfect form of my love poem, my true masterpiece.

Suddenly, rather recently, I realised that I do not have enough time for all the things that I want to say. I started painting again. Images are quicker than words! I couldn’t wait to paint life in all its aspects: beauty, despair, divinity, fear, calm, darkness, light…