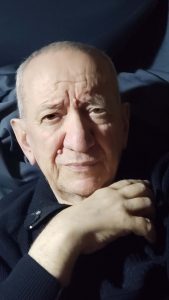 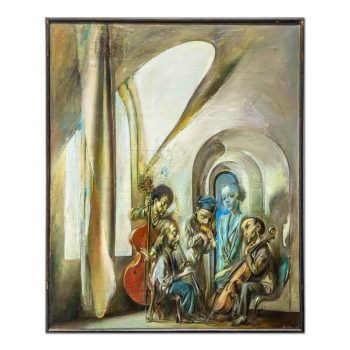 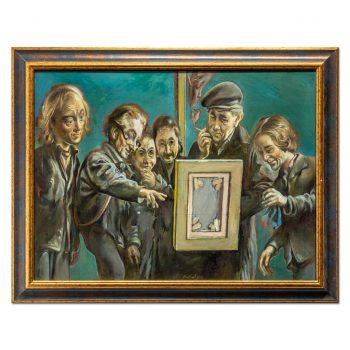 
(…) Eugen Bratfanof is preparing new works, of various sizes (mostly medium and large-sized works), based on the essential coordinates that have become to characterize him, which are singular in today's Romanian painting scene: human face/human typologies (transfigured faces, reproduced in the smallest detail); couple/couple relationships, in various scenes of everyday life; pressing and uncertain atmosphere (feeling of uncertainty, waiting, unclarity, undefined, obscure), usually found in inside rooms, rather than in natural landscapes; musical pretext for plastic compositions, whose main theme is paroxystic existence and transfiguration, determined by the listening (for the public) or reproduction (for the instrumental) of a musical area; religious theme.
Carmen Mușat Coman, Ziarul Financiar, 2002

Eugen Bratfanof is a surrealist, whose coherence matches any of the masters praised by history. If his paintings had been circulated in Europe, they might well be considered one of the most noticeable achievements of tender surrealism, if not the most significant attempt to revive a method by means of lyrical ecstasy.
Tudor Octavian, Painter Eugen Bratfanof, 2004

Eugen Bratfanof is much more known and present in the artistic circles and galleries of western Europe, where his compositions and portraits, as well as the Raphaelite fineness of the drawing and the novelty of the plastic vision (reminding of the Flemish renaissance experiences and those of El Greco in terms of perspective treatment) have constantly spoken to a sensitive and receptive audience. (...) Most often, the artist balances this picture of introverted and dramatic experiences with the induction of a sound reverie symbol that harmonizes the atmosphere and objectifies it. In almost all of Bratfanof's paintings, we discover an explicit musical landmark – a pianist in solitary recital, violinists, cellists, in trio or quartet formations, surrounded by the feverishness of acoustic harmonics. The only dynamic elements in the compositions of this painter of a humankind overwhelmed by the tragic stillness of its own hopes and impulses are these histrionic characters, dressed up in precious clothes, such as priests of light.
Corneliu Antrim, România Liberă, 2002

I think that, at first sight, when we encounter the paintings of Eugen Bratfanof, we first notice the eyes. Beyond that, however, there is so much life expressed in levels that the painter conveys to us in tones specific only to him.
Mihaela Helmis, Radio România Actualități, 2019

Eugen Bratfanof is a painter I discovered recently, though he should have been discovered a long time ago. Eugen Bratfanof is the painter of people, faces, characters who play in his canvases as if on a scene in a show whose director is the painter himself. Although he comes from Tulcea, from the city's outskirts, where you couldn't easily imagine that worlds are born, well, Eugen Bratfanof has an European allure by design. He could have lived both in Bucharest and in Paris, but also on an island in the Delta, his inner world, populated by so many actor-characters, would have been equally wide. Because he has, so far, signed more than 1000 works, in which only human faces, living faces, that betray emotions and memories, are found.
Cristina Stănciulescu, www.crystalliinastanciulescu.ro, 2019


Eugen Bratfanof was born in Tulcea on October 1st, 1941, in Marin's family, a tailor, and housewife Frosina.

He graduated from the "Nicolae Tonitza" Highschool for Fine Arts, class of 1961, and studied from 1961 to 1967 at the "Nicolae Grigorescu" Institute of Fine Arts, in Bucharest, where he had Corneliu Baba and Alexandru Ciucurencu, assistant of Vasile Grigore, as teachers.

He made his debut when he was 15 years old, with a local watercolour exhibition.

From 1969 onwards, he has participated in group and personal exhibitions (in 1985), in all selections of the Tulcea branch of UAP and in various group events, at home and abroad. Between 1967 and 1975, he was a professor of drawing at the Music School (Arts
Department) in Tulcea. From 1978 to 1987, he held the chair of the Painting Department at the Tulcea People's School of Art, many of his students later becoming professional
artists.

Some of the artist’s works were featured in international exhibitions in Denmark, Germany, France, Italy (Florence Biennale 2005).

In 2017, a new edition was published - completed, coordinated, and edited by art critic and writer Tudor Octavian.

The painter returns at the end of 2019 to the Bucharest art scene, with a new personal painting exhibition at the Galateca Gallery, an exhibition titled Eugen Bratfanof – Între lumi (Between worlds) (December 2019 – February 2020).