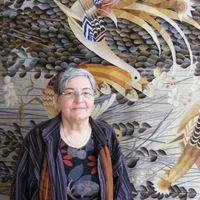 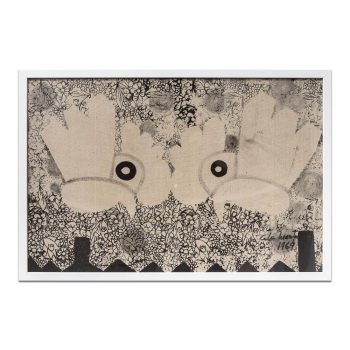 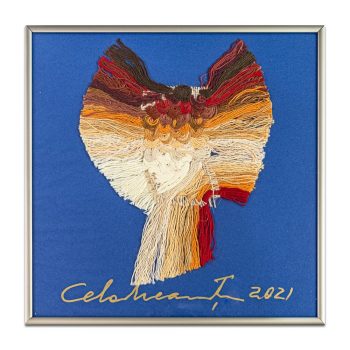 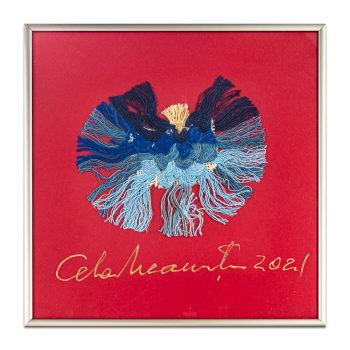 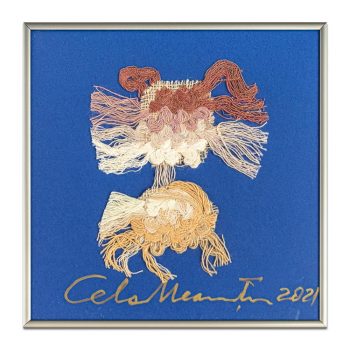 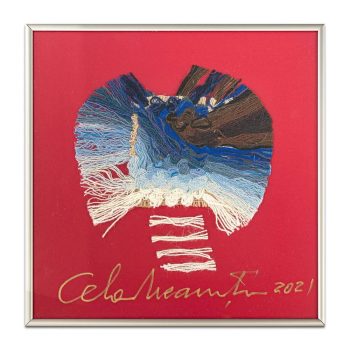 Chaos and Order I 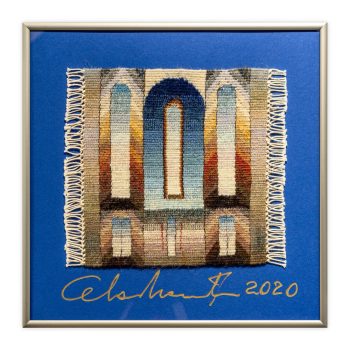 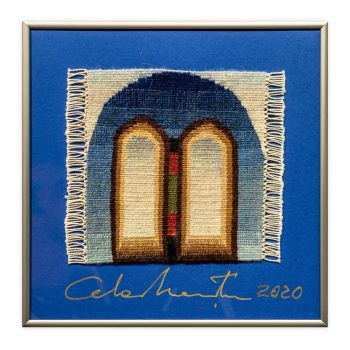 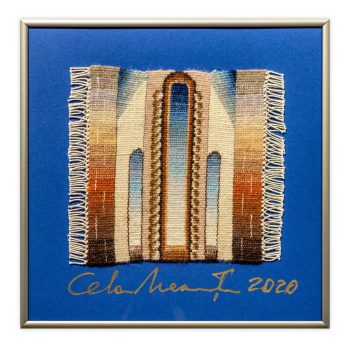 
Cela Neamtu did not reinvent herself in recent decades (nor was a “transfiguration” necessary in this case), rather she exhibited consistency for the field and practices chosen: tapestry and the haute-lisse technique (on a vertical embroidery frame), “the same used since the time of Penelope,” as the artist herself confessed, adding that the “major differences occur in the textile structure” and “in the means of obtaining an embroidery effect with the needle.” She did invent, however, much to our benefit, the lighted window, a method for breaking the two dimensional representation, for opening (through archways whose formal immaculacy is highlighted by the decorative motif of the rope moulding) bridges towards the abyss and its mysteries, for teaching a subtle near-far dialectic, for dignifying (even haloing) the embodiments disposed on the forefront and usually through a contre-jour without shade or shelter.

The window leads the way towards light, but it is also the place where the “world’s corolla of wonders” pours forth to engulf the viewer (one of the tapestries in this exhibition is indicatively entitled, Flowers Between Earth and Sky), and Cela Neamtu lets herself be swept by this flow which the viewers should not ignore or miss, much to their inner benefit. - Doina Pauleanu, art critic and director of the Constanta Museum of Art.

An impaired joy remains the meeting with the euphoria illustrated in the wool of Cela Neamtu because her tapestries transmit the blessed thrill of ascension to the open spaces of art, where the poetic and the mythical load of each image connects us to the primordial elements. Rich and expressive in representation, diverse and vital in plastic expression, the works displayed in her exhibitions always greet us with a myriad of strong, pretentious sensations, placing the object itself in the knot of universal ties, as George Calinescu once said.

In the artist's compositions we infer the concreteness of high aspirations, translated into the unity and elegance of the shapes, in the parsimonious and aristocratic selection of colors, in the perfectionism of the craft. Disturbingly melodious, with a sonority that leaves the eye free to close for dreaming, urging the hand to caress, her tapestries are the result of the permanent elevated dialogue between tradition and modernity, daring to ally the reflection of severely controlled constructivism to the rich mythical treasure. Often organized in thematic cycles (Altars, Windows, Birds, Archeology), her monumental compositions are openings of the present to the past, affective recollections of long lost times, Cela Neamtu remains as a romantic intellectual that knows how to combine the sharp sense of present observation with the intelligent gaze back, selecting the ideal plastic expression for her compositions. A cycle of tapestries (partially in progress) is dedicated to a new monastic and cultural space, with a strong international presence. We speak about the ROMANIAN SETTLEMENT from Jericho (Israel), built in the recent years (2000-2008), under the high auspices of the Romanian Orthodox Patriarchate, in the city of palm trees, located only 30 km of Jerusalem. A generous and hospitable architectural space in which the buildings of this impressive nucleus of Romanity planted on the holy land of Christianity are arranged.

Around the church, whose balanced proportions (reminiscent of the slenderness of St. Niculae Church, from Iasi), the cells of the monarchs, the abbot's office, the chapel, the multifunctional halls (library, meeting and exhibition halls), the archondar with the 100 rooms and the restaurant, finally the administrative body are arranged. / project: Arch. Prof. Dr. Sorin Vasilescu Cela Neamtu was invited to this wonderful place by His Holiness Archimandrite Ieronim Cretu, the representative of the Romanian Patriarchate at the Holy Places and the Superior of the Romanian Settlements in Jerusalem, Jericho and Jordan and by Arch. Prof. Sorin Vasilescu to initiate a possible collaboration for the ambiance of the interiors of the building. The meeting took place in 2004, after the closing of the artist's private exhibition in Tel Aviv.

Charmed by the beauty of the place and the possibility of decorating it with works of art, Cela Neamtu was captivated by this idea and the joy of accomplishment. After a long and serious deliberation with herself, she makes up her mind due to the prospect of creating tapestries permanently displayed in large spaces designed for international ecumenical meetings, conferences and lectureships with fellows or pilgrims who come to this place of silence and teaching makes. The proposal was as honorable as noble, the artist confesses, but it involved a huge responsibility. This meant a sustained, long-lasting creative effort and commitment. This work involved the design, the building of the cardboard plans, the artistic and technical creation of seven different tapestries which together make up an exceptional ensemble both ideational and artistic.

And yet ... Educated at the school of artistic emotion and generosity, Cela Neamtu decides to become the donor creator of grandiose compositions, inspired by the history of Christianity and the beauties of nature, that will populate the protocol reception halls of the Romanian Settlement in Jericho. Various sponsors support the technical achievement of the works, the design and the artistic solution representing the precious but, unimaginably generous, gift of this master creator, who, isolated in her workshop, worked humbly to lay her art to humanity. She decided to work seven tapestries, their number being naturally linked to the millennial history of the place. The Book of Joshua in the Old Testament speaks of the City of Jericho, its destruction and burning down by the sons of Israel who had left Egypt in search of the Promised Land (1407 BC, after the biblical colony).

After crossing the Jordan, the siege of the city lasted seven days. According to a certain ritual, the priests (carrying the Ark of the Covenant), the soldiers and the wanderers went along, for six days in complete silence, because in the seventh day, the huge scream broke out from everyone's chests and the deafening sound of the seven trumpets to destroy the defensive walls. Considered the oldest city in the world, Jericho still preserves the ruins of the gigantic fortifications built in this isolated desert oasis, more than 8000 years ago, before Christ. In this place of pilgrimage, beyond its mystical vocation the Romanian monastic settlement represents a center of culture ennobled by the presence of the work of art that has been and will always remain the most vital and credible servant of a nation's diplomacy.

Cela Neamtu's project includes a cycle of four tapestries, in the haute-lisse technique (250-150 cm. each) entitled ”Windows for Jericho” and which will be presented for the first time, in the private exhibition that the artist opens at the DANA Gallery, from hometown (Iasi, September 1, 2008). The following, including an impressive triptych of 500/250 cm., were in the phase of mental and composition essays.

Concerned with the envelope of things and with their meaning, the expression of forms, their decisive revelation, Cela Neamtu reaches unusual syntheses in which the real world, passed through a lyrical filter, gives a slightly romantic aura to deep meanings.

The faces originating from the legend, the symbols subject to the canon of ermines calligraphed with the serene nobility of Byzantine iconography, the expressiveness of the plastic phrase, which preserves the imaginary of the parable in the development of the scenes, the impeccable chromatic dose and the meticulousness of the filigree solution of every detail, all taking part in the transfiguration of the banal into hyperaesthetic vectors.

The tapestries for Jericho, austere and elegant alike, convince us to step beyond the ordinary of our existence, in the area where the healing joy of harmony tends to the absolute. They address the public with generous cordiality, in a direct, immediate and uncensored dialogue, once again, proving that an authentic and spiritual creator, applying morality and the laws of beauty, can transform the ephemeral into splendid perennial aesthetic compositions. In the severe bet made with the time, weaving together with her assistant (Marcela Marin, the one with the golden hands), Cela Neamtu did not hesitate to face him with brave perseverance, in a strong desire to carry out the promised project. Its achievement is not only a daring gesture, of great strength and generosity, but also a fascinating national cultural event due to its complexity and prestige.

Since on the market of ideas and forms of expression typical to the Romanian culture, hers tapestries, permanently exhibited in the Romanian Settlement in Jericho, become the gold coin entered in the huge international competitive art exchange.

In the private exhibition of Cela Neamtu from Iasi, organized in the elegant DANA Gallery, the Windows for Jericho are accompanied by another group of tapestries (Sanctuary, Royal Bird, Reflections) that brought to the author and implicitly to our country the Gold Medal of Paris International Salon of the Arts (Grand Palais 2006).

This time we are facing a feast of colors and materials that raises the value of tapestries to the rank of high art worthy of standing honorably in front of the critical and sharp eyes of a goddess, as Klaus Klopschinski wrote. (Textilkunst, Hannover, 1983) - Dorana Cosoveanu, art historian and critic.

In the parsimonious landscape sprinkled with first-rate figures of the contemporary Romanian tapestry, Cela Neamtu undoubtedly occupied a pre-eminent place; and provided it with natural endowment for the visual arts, through an unhesitating work, through the activation of forgotten, interpreted, adapted techniques, through originality and the style willingness. Simple, double or triple windows, frames, columns, rope moldings inspired by the sacred architecture from the medieval age are an integral part of sumptuous spatial constructions; overflows of leaves and flowers, lush vegetation, wise and graceful birds, arches of heaven and earth alike, arranged by symmetry and solemnly unfolded in space, make up the recognizable, authentic, deep world of Cela Neamtu. -Dr. Doina Pauleanu, art critic and manager of the Art Museum of Constanta.


Cela Neamtu was born on July 16, 1941 in Piciorul Lupului town, Iasi county. Between 1960 and 1966 she attended the courses of the “Nicolae Grigorescu” Institute in Bucharest, Textile Arts Section, and she has been a member of the Romanian Union of Fine Artists since 1970.

1974    The Prize of the Romanian Union of Fine Artists for Prototype;

1978    2nd place Prize for Tapestry awarded by the Ministry of Culture;

1984    Award of the Romanian Union of Fine Artists for Tapestry;

1986    Honourable Diploma at the Quadrennial of Decorative Arts in Erfurt, Germany;

1987    Plaque at the 8th International Arts Biennial in Valparaiso, Chile;

2001    National Order of the Faithful Service with the Rank of Commander;

2003    nominated for the Romanian Academy Award;

2005    Prize for Excellence from the Romanian National Patronate;