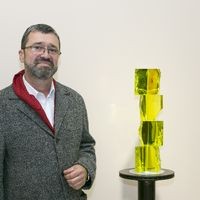 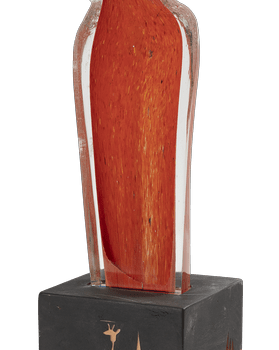 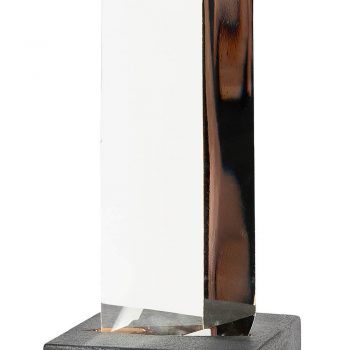 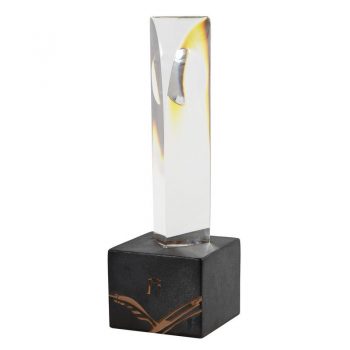 
“His works, with their diamond-like surfaces, seem to be rather meant for decorating the fairy rooms of some planetary homes of the future ages, as there are mingled inside these works the reflection with the solar spectrum, transparency with opacity, and mate with glimmering, resulting the mystical universe of the materiality.” - Dr. Adrian Silvan Ionescu (1987 - Catalin Hrimiuc personal exhibition catalogue)

“Hrimiuc’s glass work concentrates mastery data of this complicated artisanry reminiscent of the Renaissance artist, never satisfied with what he could tear from the fire; he keeps searching and experiencing in order to unravel new instances of transparency. After having been graced by flame, the humble sand becomes with him light and transparency.” - Dan Grigorescu (1989 – Catalin Hrimiuc personal exhibition catalogue)

“The glass is for him the symbol of purity but also the joy of life. Catalin Hrimiuc knows how dangerous the material’s, the glass’s beauty is, that’s why he successfully tries to avoid it, for not slipping in a superficial decorative. The onlooker is amazed of the apparent discrepancy existing between the volume of the glass abstract parts and their easy and graceful shape.” - Christina Schroeter (1990 – The Frankfurt am Main Decorative Arts Museum)

“The sculptor’s favourite material is the optical glass. A pretentious, serious, solemn and self-sufficient matter, a matter that hardly allows the chisel’s or mind’s cutting edge to strike it.” - Daniel Nicolescu (2000 – The Cultural Observer)

“ (…) Catalin Hrimiuc continues to use his favourite material, the optical glass, showing us a unitary cycle of works which have the light as a metaphoric general topic. (...). This choice includes also a praise of transparency, the outstanding quality of the material he is working with, meaning to structure a vibrated light space around the guiding idea in which each element is an integral part of an environment not devoid of symbolic connotations. Because the signs that Hrimiuc is engraving like even inside these blocks of „solidified light” suggest an unknown series or elements of a decoration which belonged to an extinct civilization.” - Andrei Pintilie – („The Eye in the Ear” – Meridiane Publisher, Bucharest, 2002)

“Empathic and inspired, an alchemist with much knowledge of the mixing, in imaginary retorts, of the substances producing the vitreous liquid, Catalin Hrimiuc is dazzling us at every new show with a series of fresh works. I have been observing his evolution since his debut and since then a warm and close friendship is binding us. But, when being confronted with his work, friendship stops – or rather it is overshadowed by the critic’s profession that requires objectivity and imposes a rigorous and pertinent analysis of the object. Catalin Hrimiuc is both a sculptor and a decorator artist, adding to the stone carver’s and clay modeller’s artistry the craft of the creator of delightful objects, for the interior design. Descendent of Lalique, Gallé and Tiffany, he conveys the opalescent glass and the crystal with the pictorial feeling characteristic to a born colourist. Weird forms, of organic nature – which are sending your mind to the primordial era – or elegant gothic cathedral pinions, wonderful water surfaces or impetuous mountain peaks are as many proposals of objects invested with subtle tactility and immanent idealization that Catalin Hrimiuc knows to leaven through a generosity of his spirit of an eternal playful child. Because only from playing you can get a creation to provide something perennial! ” - Adrian Silvan Ionescu, PhD in Historical Sciences (January 11, 2012)

“(…) The artist conceives sculptures of light where everything is changeable and uncertain Stage-lighting based on the orientation of nature (natural or artificial, and the first case of waking hours), the hue and intensity. The radius of the top or bottom design changes radically while the shape remains the same meaning work. Voltage variations produce variations in the reception. Sometimes their effects are purely Suprematist: light light, white on white! Aware of his ability to master light and to give him plastic meanings, the artist labels his works accordingly: Light Gate, Light Column, About Light Logic. Another area in which the artist is fully express the tactility. Brancusi wanted to make sculpture for the blind. Hrimiuc combines the skillful manner, those rough surfaces with smooth, polished with some of the matte teeth lofty granitic rock and mountain salt of the cutting blades eroded by rain and wind. They addressed equally blind that they can discover the comfort values as those with sharp eyes. How much science and how much effort to close an air bubble in glass block, pouring! How much painstakingly polishing one side of the object and it hurt other aggression incavaţiilor and angulozităţilor! When working with certain nuances bottles get a sublime pictorial. Nacre finds preciousness in glass opalescent milky. The games scholarly pretentiousness chromatic lights get expensive metal, old gold and silver glow brightly (Queen, Lamura, Ambigua, Suspended time).” - Adrian Silvan Ionescu, PhD, “The spirit of .... glass”, March 17, 2015

“Outstanding presence in major international exhibitions dedicated to Glass of Art, Cătălin Hrimiuc celebrated 25 years of exploring the optical glass, a noble and pure material that demands the artist’s vision in approach, concentration in execution, perfection in finishing and, above all, imagination. It is ready to intervene during the elaboration for the technical part, major in the birth of the object, not to invoke or express the industrial. Serious sensitivity, with extensive poetic valences, cautiously protects Catalin Hrimiuc from the industrial spectrum. His secret elaboration brings together the architectural vision, always clear, affirming certain monumental valences, with delicate engraving in glass, hidden intervention in the heart of the material or in its translucent foundation. From there, what appears to be a detail, a geological trace or a tegument, becomes itself and the truth revealed, hieroglyphic, and returned in light with subtle irises and opalescence. The object thus becomes meaningless, unseen, but indefensible, Hrimiuc, only through the mystical engagement between tekné and Psyché.” - Doina Mandru, the opening of the “Hrimiuc” exhibition, May 19, 2013