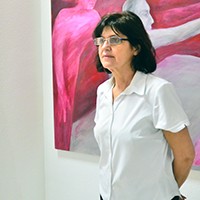 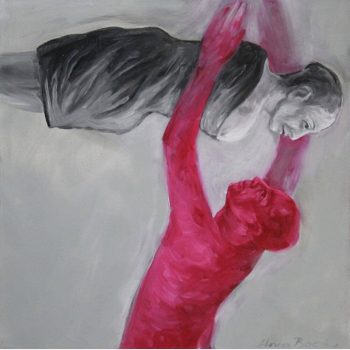 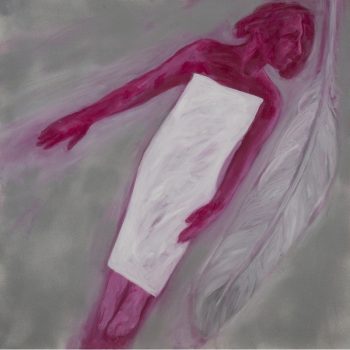 Impression of flight I


Boeriu’s Workshop of thoughts (the name of her personal exhibition opened at the Brancoveanu Palaces Cultural Centre in Mogosoaia in November - December 2015) has undergone in a few months the metamorphosis needed to become a Workshop of Dreams. The artist's heart-breaking, exhausting – the exhibition event mentioned was organized in the wake of the tragic events at the Colectiv Club - sublimated, concentrated and consumed thoughts have been gradually converted into dreams, but not in illusions. For accomplishing this process the Leap into the Void imagined by the illustrator in a grey twilight was necessary.

The fall changed its path and became, at the end of an uncertain and exhausting complex process, a float or even a flight; the steps of this undertaking with no guaranteed purpose involve characters in ascension actions (Trying to Fly I, II and III), in which people of both sexes, in groups of two or three individuals, let themselves drifted by the ascension current without struggle or only bringing minimal contributions to the materialization of the overall effort; consumed in oneiric register, the transformation phases store fear, distrust and tension that accompanied them in (Recollection about the flight).

Remembrances aim passage rites or only essential facts and happenings; thus, in the work Maternity, the serene face of the baby and the diaper he wears, of an insistent and persistent immaculate white, seem not to wipe the concern from the face of his mother who protects him; knowing the fragility of beings and of the world, the woman knows (and this certainty tightens, almost grips her traits) that she will not be able to protect her child (who would inevitably become an adult), indefinitely; in another painting - Anca Boeriu, lecturer at the Department of Graphics of the National Art University of Bucharest works, even voluntarily experiments in various fields and techniques - the same female character in different situations seems to evolve to a different direction than the one pointedimperatively by the man; if at all, their clothes seem like smoke, dissolved in the wave curve become a support in topos atopos, a place without a place where the action is shown to be not only improbable but also unnecessary.

Other characters imagined by Anca Boeriu, or renewed aspects of the same couple, hard to recognize because they levitate, embody, fragmentarily enter or exit the framework, approach to or intersect on unpredictable directions, with expressiveness concentrated in faces and hands (sometimes oversized or presented in academic foreshortenings that justify such upheavals in proportions) seem trapped in situations with No Escape, of a laconic and disturbing drama.

Likewise, Thoughts about the Past are not about bucolic situations or Edenic landscapes, smiling vegetation and fabulous colours; the woman’s face who constantly haunts the man' dreams and the man's hand stretched (in the second work of the series) to the woman who ignores him, seem to translate in painting specific processes and effects of a print technique (black manner); on a dark and lacking valorisation substance, transparent, even ghostly, monochrome and single-stringed, the characters seem doomed not only to one hundred years of solitude, but to perpetual loneliness, even if they appear, usually in pair. And when touching is however consumed – an arm emerges in the frame, trying to decipher in atactile way, the profile of the resigned face – the ambiguity is deliberated; the author does not provide the interpretive key intended to separate dream from reality, so you cannot know who caresses and who is caressed, you do not understand if the touch is healing or just uptight and disturbing.

Lithographs from the series About Distances are populated with characters convinced (finally) to approach each other, so that the soliloquy may become a dialogue or even a communication process (to be noticed how characters’ shadows with constructive and symbolic role appear and intervene in the image); the three Self-portraits of the exhibition seem rather an outside projection of their own thoughts, then a foray into the aesthetic and psychological data of the investigated self. Finally, the Unexpressed Dreams introduce us to the author’s secret lab, hardly but firmly isolated from the others through sills (this seems to be the significance of the horizontal shades behind which the suggested scenes unfold); here the author tries to detach from the noise and fury of the world (the oversized feather suggests not only the flight which has become a leitmotif of this creational period, but also the celestial order), aspiring to the undertone, silence, or just the primordial purity. - Doina Pauleanu, PhD, Art Critic, Director of the Art Museum of Constanta.


Anca Boeriu was born in 1957 in the town of Pucioasa, Dambovita county and has graduated from the National Art University of Bucharest, Graphic Department

Created and coordinated the Erasmus office in the National Art University of Bucharest, between 2005-2011

Represents Romania at the Print Triennial in Chamallier – France in 2000

As of 2014, becomes Coordinator for B.I.P.B.-Bucharest International Print Biennale

Since 2016, is the President of the Print Subsidiary of Bucharest

During her artistic carrier, has received numerous awards and honors as follows:

- the Award for Print at the Eminesciada International Contest in Iasi

Anca Boeriu has taken part in a series of group cultural projects in the country and abroad. She had a series of personal projects of which we mention

Painting and Print Exhibition at the Art Museum of Tulcea