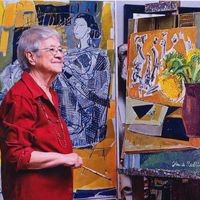 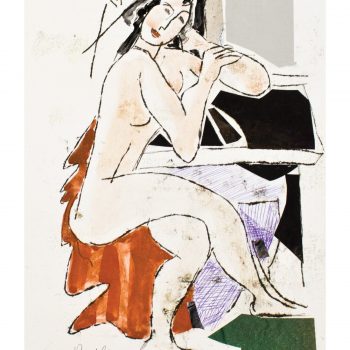 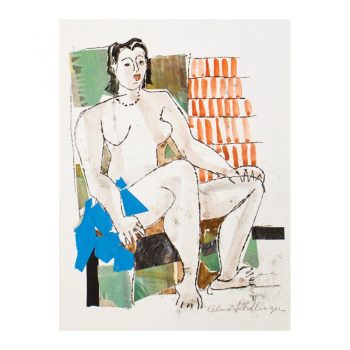 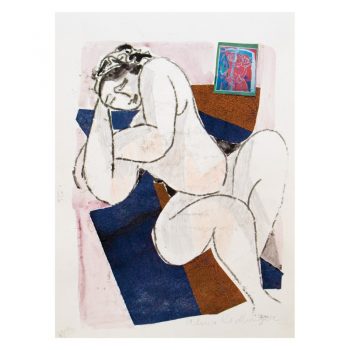 
The creation of the artist born in 1924 and taught by M. H. Maxy sets, into a harmonious continuity, conceptual and language elements specific to cubism, fauvism, expressionism, constructivism –avant-garde movements of the past century, transposed and adapted to a contemporary style which, while certainly postmodern, has already classed and classicised them. Completely synchronised with the era during which she is living, the artist is working in the wake of these cultural trends with the constantly renewed joy of discovery, a joy which this generation of masters must have felt when it managed to restore a lost continuity, to inform, to free itself from the oppression of the rigours and conventions imposed. The prestige of the models, which the contemporaries seem to sometimes discard with ease, has profoundly marked the works of these artists and has manifested itself in different, if not opposite ways.

In Alma Redlinger’s case, it appears in reference points of a prodigious cultural memory, taking the shape of admiration, colloquial expression or quotation: Magnolias with a book on and construction elements taken from the work of Braque, the Seashell. Homage to Légèr, homage to Matisse and Yellow Water Lilies with the same one, Homage to Picasso, Water Lilies, Homage to Gauguin, Magnolia with Vincent and Sunflower with Van Gogh, Olives with album and signs taken from the work of Klee, Apples with Dufy, Lilies with Le Corbusier, Water Lilies with Rembrandt, Homage to Maxy. In the same vein, we must mention the motives (the odalisque, for instance) or the props (mugs, bottles, pipes, flowers, books and newspapers, fans, calendars, paintings, chairs and lounge chairs, fruit, cutlery, disks and musical instruments, the palette, the brush and other specific utensils) inserted naturally and repeatedly in the image’s structure. This is the form chosen by the artist to communicate, in order to position herself in a succession, in order to confess her admiration, in order to thank. If she positions herself in a succession of generations, the artist is also naturally presenting her works in a succession which has a project as its basis: Behold the man! Behold the work! Without being a retrospective, the exhibition opened at the Senso Gallery brings together works of graphics and painting created not only now, as a nonagenarian, but also over the last decades, without leaving out significant moments, stages or thematic series.

In the field of graphics, Alma Redlinger tackles watercolour, ink and charcoal, but also engraving, often combining them, with possible additions, in mixed methods; in terms of types and styles of these, we have the portrait and the entire figure, the composition with characters, the urban, rural or marine landscape, the (female) nude, the interior, the genre scene, the still life with flowers, fruit, books and objects. Thus, brought together, in a serene and logical juxtaposition, monochrome images, with subtle values, summary, but accurately and carefully traced notes, coloured impressions, similar to arpeggios, or works which the artist has lingered on, has returned to, has focused on, to which she has added more depth. In all these cases, the line, with confidence and particular grace, traces contours, indicates details, works in perspective, registers, delimits, unifies or builds, as the case may be. Alma Redlinger’s drawing style, restrained or impetuous, but with a high degree of technicality, provides a sure framework to any composition. In the forms traced this way, the colour intervenes authoritatively in order to grant the image harmony, musicality, in order to give spatial indications, to build screens, to intervene as a counterpoint, to set a hierarchy, to impose; intense and brilliant, superimposed or bravely juxtaposed so as to create complex effects, showcased as a stain in order to institute and transmit the rhythms of the image, colour never has a subordinate role.

Adding the plunging perspective used most often or showcasing in two dimensions, angles of approach that are difficult to predict, intense expressiveness, sometimes even ardent, of both the characters and of the objects, the light that invades the image and saturates or haloes the shapes, we discern only partly (as any other follower of the open work), the originality of an artist with a distinct personality and an unmistakable style – PhD Doina Pauleanu, art critic and director of the Art Museum of Constanta.

Since 1951 she is a member of the Visual Artists Union of Romania.

One of the most important exhibitions is the one from Dalles Hall, March-April 2011 when, on this occasion, Adrian Buga, the exhibition curator and author of the catalogue has also launched the exhibition’s catalogue, published at the UNARTE publishing house. The photographs of the works have been taken by Victor Bortas, and the graphic concept was done by Gabi Dumitru. The exhibition was opened by Professor PhD Ruxandra Demetrescu, rector of the National Art University, and by Mr. Mihai Oroveanu, general director of the National Contemporary Art Museum.

In March of 2014, at the Caminul Artei/Art House gallery the exhibition “90 years of living, 70 years of painting” is held, curator Adrian Buga.

Participant in the state exhibitions and official salons since 1945.

Participant in numerous group exhibitions among the most recent we can mention:

2009, A woman of worth, Jewish community centre

2010 – the exhibition 94 artists contemporary, at the Art House gallery, an exhibition organized by Dragan Djordjevic

2013– The exhibition of the Unconventional Newspaper – Barlad museum, October

2014 - The art exhibition of the Unconventional Newspaper, organized by Paula Ribaru, at the Museum of the Romanian Peasant

Monumental works of art composition with folk dances, held in 1959-1961, in Poiana Brasov, Sports hotel, together with painter Mimi Saraga Maxy, and the composition with school sports on the façade of school no. 122, in Antim, demolished along with the entire neighbourhood in order to build the People’s House.